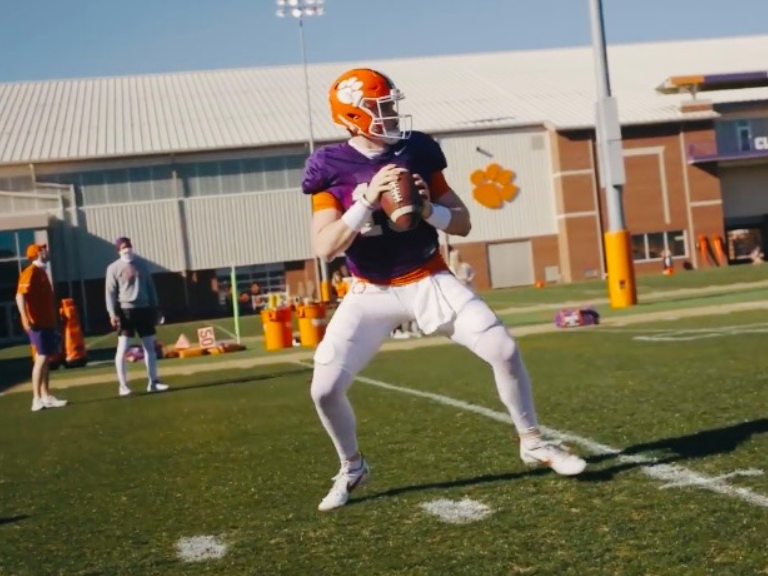 Select members of the media were allowed to view the Clemson football team last Friday, while the Tigers conducted drills. There was a scrimmage – not a full scrimmage, but a situational scrimmage – Saturday.

At the scrimmage, Quarterback Hunter Helms who played at West Columbia’s Gray Collegiate Academy, accounted for all of the scoring except a field goal by BT Potter. Helms threw three touchdown passes and he ran for another score.

Helms, who is now 6′ 2″ and 215 lbs, had the highest completion percentage at 75 percent and the highest efficiency rating of all the QB’s at Clemson last season.

David Hood, a senior writer for TigerNet.com was invited to see the team’s drills. He said Helms, who is a preferred walk-on, has been impressive when he got into games in the 2020 season. He also said Helms was the second quarterback in the rotation Friday and Saturday.

Hood said:
For now Helms is “making the most of his opportunity (and maybe earn a scholarship.) He was impressive in Friday’s drills and seems not only to have a nice grasp of the offense, but the kid can also sling the rock.” Clemson football Bio below

Walk-on who impressed with a two-touchdown performance at Georgia Tech as a true freshman in 2020 … enters 2021 having completed 9-of-12 passes for 77 yards and two scores in 22 snaps over three games.

2020: Completed 9-of-12 passes for 77 yards and two touchdowns in 22 snaps over three games … made collegiate debut vs. The Citadel, completing both of his pass attempts in the game … completed 5-of-7 passes for 74 yards and two touchdowns at Georgia Tech … became only the third Clemson quarterback who started his career as a walk-on to throw a touchdown pass since 1954, joining Nick Schuessler (three touchdown passes in 2016) and Donny McElveen (one in 2010) … joined Schuessler (two vs. Syracuse in 2016) as the only original walk-on quarterbacks to throw two touchdowns in a game for Clemson, but became the first to do so while still on walk-on status, as Schuessler had been placed on scholarship prior to his two-touchdown game … went 2-of-3 vs. Pitt.

Before Clemson: Lettered at Gray Collegiate Academy in West Columbia, S.C. … recorded 4,126 passing yards and 48 touchdowns as a senior, leading the War Eagles to a second straight region title and an upper state semifinal appearance … finished his prep career with 9,129 passing yards and 98 touchdowns.

Personal: Pre-business major … elected to walk-on at Clemson despite holding scholarship offers from South Florida, Troy, Holy Cross and others.