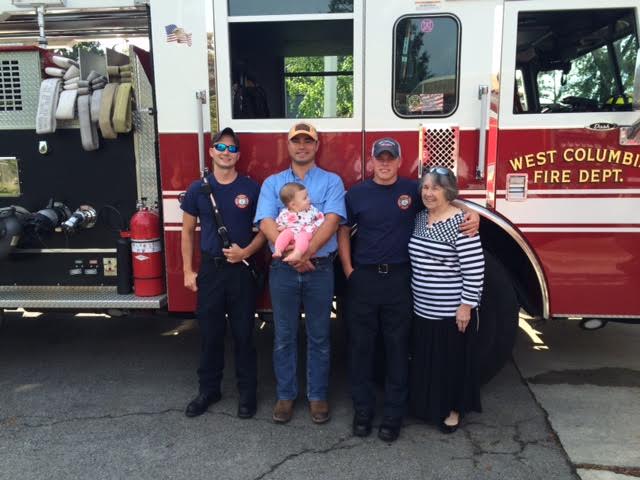 October 13, 2015|[email protected]_news|Comments Off on West Columbia firefighters save woman’s life in flood|NEWS

Raging flood water jerked Clara Gantt from the arms of Bradley Smith.
Smith is a Swift Water Rescue Technician with the West Columbia Fire Department.
“The current was so strong and she slipped out of my hands,” said Smith. He was in Columbia on the Sunday morning of Oct. 4.
Lt. Sean Harshaw said the WCFD began receiving calls overnight. Flood waters were rising all around.
Smith, with partners Russell Derrick and Tyler Lund, had the unit’s boat and were dispatched to Columbia’s Wilson Road to help Gantt, who had been trapped in her car in a sea of fast-moving flood water. She had been there for hours holding on to a cross that was close to a church by the flood site. Her grandson Travis Catchings had come to help, but he was stuck, too.
Smith made his way to Gantt. He was ready to put her on a board used for water rescue. Derrick and

Lund anchored Smith, who was connected by a tether. But when Smith lost his grip on Gantt, he knew she was sure to drown in the flood.

“I unhooked the tether,” Smith said. It is an action that is not advised in training.
“I could not live with myself if I let her drown,” said Smith.
Smith lost sight of Gantt, but then he saw her clinging to part of a mobile home that was sticking up through the current of water. Smith was able to maneuver to Gantt. He got to her, and made contact with his team, who then pulled him and Gantt to safety.
WCFD Chief Wyatt Coleman said he is pleased his crew responded in a professional manner and saved lives. “It’s their job, and I’m proud of them for doing it,” Coleman said.