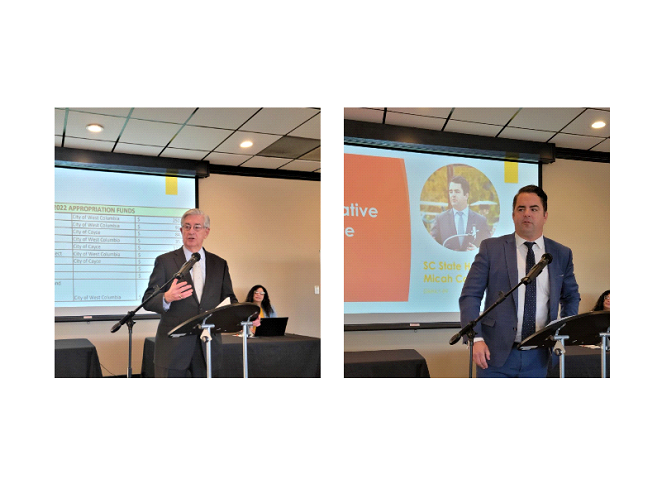 The Greater Cayce-West Columbia Chamber of Commerce conducted its first Business Breakfast of 2023, Tuesday. State Sen. Nikki Setzler and Rep. Micah Caskey gave a Legislative Update at the meeting. It was held at Stone River in West Columbia.

Setzler’s addressed road improvements. He said the SCDOT will widen I-26 to six lanes beginning in Lexington County. The widening will begin at Exit 125 at Old Sandy Run Road and end at the Caw Caw Road interchange at Exit 136 in Calhoun County. A new interchange will also be added. Interstate-26 coming west from Charleston will also begin to be widened from four-to-six lanes.

Setzler said the Carolina Crossroads, or Malfunction Junction, reconfiguration has already begun, at Exit 109 on I-26. It includes reconfiguring 14 miles of the I-20/26/126 corridor in an effort to place a priority on time-saving and safety. He described it as the largest venture ever undertaken by the SC Department of Transportation. It’s bigger than than the Ravenel Bridge in Charleston.

Other legislative action has resulted in the addition of 1,100 acres to the Congaree Creek Heritage Preserve. Almost $30 million has been directed toward projects that include expansion of the Riverwalk and a soon-to-be-announced addition to the Riverbanks Zoo and Garden that will involve the Lexington County potion of the zoo. Lexington County received $9.8 million from the Savannah River Site Settlement. The Saxe Goth Industrial Park will get $7.3 million of that for road and water access expansion and site preparation.

Setzler said issues that will be considered in 2023 include economic development; education; healthcare; and the environment. He said the COVID pandemic resulted in an academic slide for students in the state and the legislature must address it.

Setzler also said there is a divide in the state that leaves rural areas without proper schools or healthcare access. He said the lack of hospitals in rural areas, and fewer education opportunities, hurts economic development.

Setlzler said partisanship is a growing problem in South Carolina. He said moderates need to come together to combat extremes on the left and the right. Setlzer said out-of-state interests are driving an agenda with dark money.

Caskey spent most of his time decrying outside interests that are spending money in the state to create a narrative and manipulate voters with hot button issues. He used the House Freedom Caucus as an example. He said he agrees with some of the issues espoused by the groups, but warned voters to “examine what is happening, critically.”

Caskey said it is important to engage and pay attention to what is being put before you.
“You better wake up,” Caskey said. “If you don’t we’re going to be in a world of hurt.”