Rocketman brings down the house, with Koger Center performance

January 17, 2016|[email protected]_news|Comments Off on Rocketman brings down the house, with Koger Center performance|NEWS

Rocketman, a tribute to Sir Elton John, played to a capacity crowd at the Koger Center for the Arts, 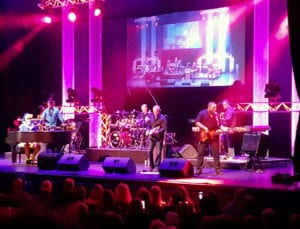 Greg Bickley, and his band, Tokyo, Joe performed to perfection, Elton John songs, including Your Song and Philadelphia Freedom, and all the other favorites.

At the end, Tokyo Joe took the stage, without the costume of Captain Fantastic, to play three of their songs for a cheering and receptive audience of 1,400.