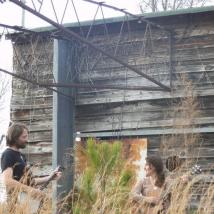 The Rhythm on the River Concert Series, at the West Columbia Riverwalk, is a tradition.

“This is the twelfth year of the concert series,” said Gregg Pinner, president and CEO of the Greater Cayce-West Columbia Chamber of Commerce. Pinner was part of the brain-trust that established Rhythm on the River. It is held on the banks of the Congraee River, at the West Columbia Riverwalk Amphitheater.

This year’s spring concert series kicks off in five days (on April 23) with The Post Timey String Band and Prettier Than Matt. The performance will include a CD release party.

The concerts begin at 6 p.m. and are free to the public.

In its 12 years, there have been more than 90 musical artists playing Rhythm on the River.

Pinner said the performances are cozy, but well-attended for the size of the venue.

“We get an average of 400-600 every weekend,” said Pinner. He also said the family-friendly crowds have grown steadily each year as more people discover the series.

There are some changes this year. House of Raeford, one of West Columbia’s largest employers is now a sponsor. And 2016 will be the last year of the concert series before the large-scale Brookland project is built across the street from the amphitheater.

Besides music, there is food.

“There will be four food trucks serving at the concerts,” Pinner said.

There is also a new rain-out location for Rhythm on the River. That is Tin Roof in the Vista.

Pinner also said April 30, is an “alcohol free” concert in support of weekend sponsor FAVOR (Faces and Voices of Recovery.)

Also, dogs on a leash are welcome, and blankets and lawn chairs recommended. No alcohol is permitted entering or leaving the area. Beer and wine are available for purchase.