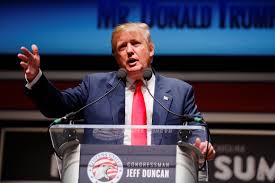 Republican Donald Trump, who is running to be the GOP nominee for president, spoke in Hilton Head, Tuesday. Here are some the quotes from his visit to South Carolina.

“I see your senator, what a stiff. What a stiff: Lindsey Graham.”

“And then you have this guy Lindsey Graham, a total lightweight. Here’s a guy — in the private sector he couldn’t get a job. Believe me. Couldn’t get a job. He couldn’t do what you people did. You’re retired as hell and rich. He wouldn’t be rich; he’d be poor.”

“And then I watch this idiot Lindsey Graham on television today, and he calls me a jackass.”

“I said to myself, you know, it’s amazing. [Graham] doesn’t seem like a very bright guy. He actually probably seems to me not as bright, honestly, as [former Texas Gov.] Rick Perry. I think Rick Perry honestly is smarter than Lindsey Graham, but what do I know?”

“We have a president who just can’t say a few words: ‘Put the flags at half-mast for the five marines that were just killed.’ Why? Why? Why? … It’s almost like, does he read the papers? Does he watch television?”

“I’m not a fan of Jeb Bush, because Jeb Bush is a fan of common core and weak on immigration. … And he’s not a dealmaker. Who would you rather have negotiating against China?”

“The press is very dishonest.”

Reporting of the national unemployment statistics ( Bureau of Labor Statistics)