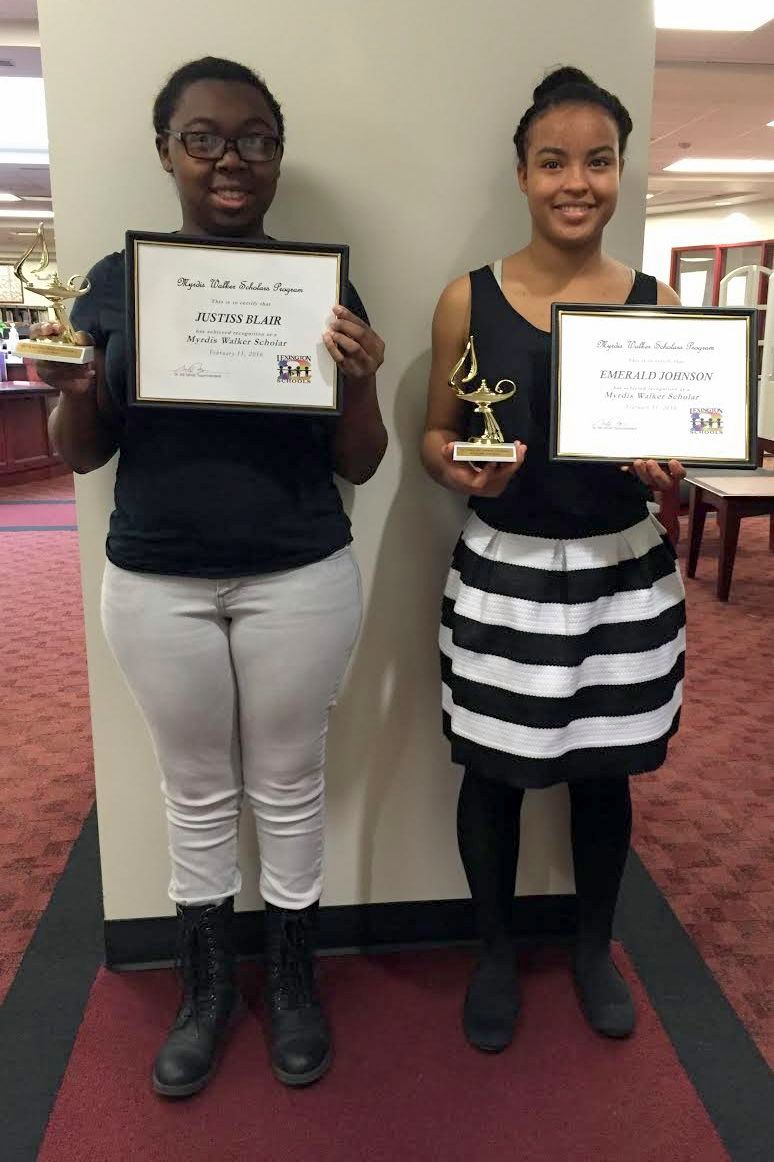 The Myrdis Walker program recognizes African-American students in grades eight through twelve who have demonstrated the potential to excel in academics.   In order to qualify, a student must be identified as gifted according to the South Carolina criteria or have acquired a class rank in the top fifteen percent of his/her high school class.  An additional goal of the program is to establish a peer support group of outstanding African-American student scholars in our school district. To be inducted into the Myrdis Walker Scholars Program, eighth grade students must be an African-American student who is 1) identified as Gifted and Talented (state guidelines) and are enrolled in English I and/or Algebra I or II) enrolled in English I and/or Algebra I (and not GT) and have a cumulative GPA of 3.4 at end of their 1st semester. High school students must be an African-American student who is currently in the top 15% of their high school class ranking cumulative through the first semester of this school year.

Mrs. Myrdis Walker taught at R. Earle Davis Elementary School in Lexington District Two for many years.  She was truly a “gifted”teacher who challenged and inspired all of her students.  Myrdis Walker valued education and had a passion for everyone to learn as much as possible.  She did not withhold her gift of teaching, but reached beyond the walls of school to motivate students to learn. In 1990 Lexington School District Two wanted to recognize its outstanding African-American students, and the program instituted to do so was named in honor of this gifted educator.  Dr. Rudolph Wise, a local physician who specialized in oncology, was a former student of Mrs. Walker and was very instrumental in establishing the Myrdis Walker Scholars Program.

Quincey Cardell Sutton, minister of worship arts and youth pastor at New Life Outreach Ministries in Swansea, South Carolina, was the special guest speaker for the evening. After graduating from high school and the SC Governor’s School for the Arts, Mr. Sutton received training at Trident Technical College’s Broadcast Journalism Institute; he also furthered is training in the United State Marine Corps and became a Combat Engineer. While staying busy with his career as a vested employee with the Department of Public Utilities in Orangeburg, SC, he still has time to run his on business. He is founder and CEO of Q-Concepts Design and Consulting. He serves as a mentor for Lexington School District 4, on the Early Childhood School Improvement Council and on the Title 1 Advisory Board for District 4.

Several members of the late Mrs. Myrdis Walker’s family were present at the ceremony. Her son Micheal Walker presented the scholars with their trophy and certificate assisted by each school’s Principal and Guidance Counselor.  Mr. Frank Baxter, the late Mrs. Walker’s brother, gave special remarks and introduced her family.