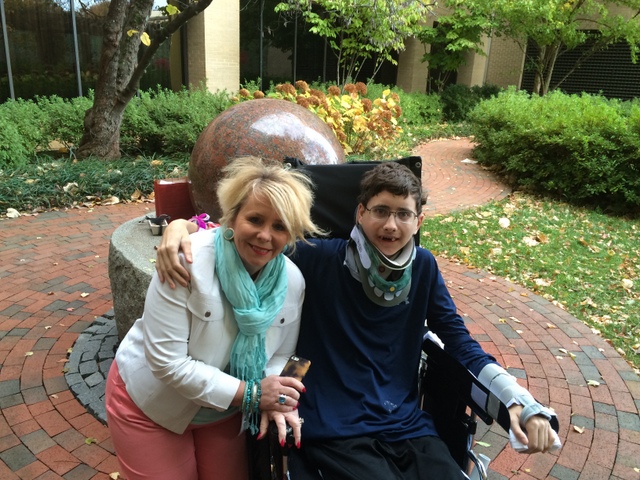 The life of Bradley Bingham changed drastically on Oct. 16, 2014.

On I-26, on his way back to Lander University, the 18-year-old was hit from behind, and driven into a tree. He was airlifted from the scene.

His injuries were so severe there were times Bradley’s family wondered if he would survive. He has not been able to return to college. And the road to recovery has been a challenge, but that has not stopped Bradley from working hard to get his life back.

“Bradley is currently learning to deal with his physical limitations,” said his father, Bill Bingham, of Cayce. His mother is Dr. Frieda Bingham, Instructional Coordinator for Lexington school District 2.

Bradley, in what seemed like it would have been a miracle a year ago, is studying Networking and Server Support in the S.C. Vocational Rehabilitation Information Technology Program on Boston Avenue in West Columbia.

“I’m grateful for all the people looking out for me, and all the prayers,” Bradley said. He also said he is happy. That is a profound statement considering what Bradley has endured.

He suffered breaks in his cheek bones, eye sockets, palette, and lower jaw. Both mandibular joints were shattered. He had a skull fracture and an ankle fracture. He also lost about half of his teeth.

“Bradley was in the ICU for about two weeks and in the hospital for almost six weeks,” said Bill Bingham, a Lexington School District 2 Board Member. “He had a tracheotomy and a feeding tube for about six weeks and was on a ventilator for about a week.”

One of the most damaging of Bradley’s injuries was to a nerve in the left arm. Bradley was not able to use the arm, or shoulder, since the accident. His muscles had withered and his arm was drooping.

With no improvement in his arm by last May, doctors at MUSC in Charleston referred Bradley to Dr. Rob Spinner at the Mayo Clinic in Rochester, MN. Bradley- and family- have made the 21-hour trip to the Mayo Clinic four times in nine months.

“From tests, the doctors could see that there was some firing of the nerves in his bicep muscle but not enough to overcome the weight of his arm under gravity,” Bill Bingham said.

Bingham said Dr. Spinner and Dr. Alexander Shin recommended Bradley be fitted with a myoelectric limb called MyoPro. It’s is a powered brace that supports a weakened and deformed arm for functional use. The device senses impulses in the nerves and assists in arm movement.

During his last evaluation, in January, tests show restoration of Bradley’s arm muscle has begun. He still has a way to go, “But the doctors are very optimistic,” said Bill Bingham.

It could take up to two years for the maximum benefit of the surgery to manifest.

In addition to the treatment of his arm, Bradley has had oral surgeries for the repair of his teeth and he is undergoing bone grafting and he’s getting implants to replace teeth. He is restricted, right now, to eating soft foods that are easy to chew. He will have at least two more oral surgeries.

Despite the hurdles, Bradley has taken on his comeback, aggressively.