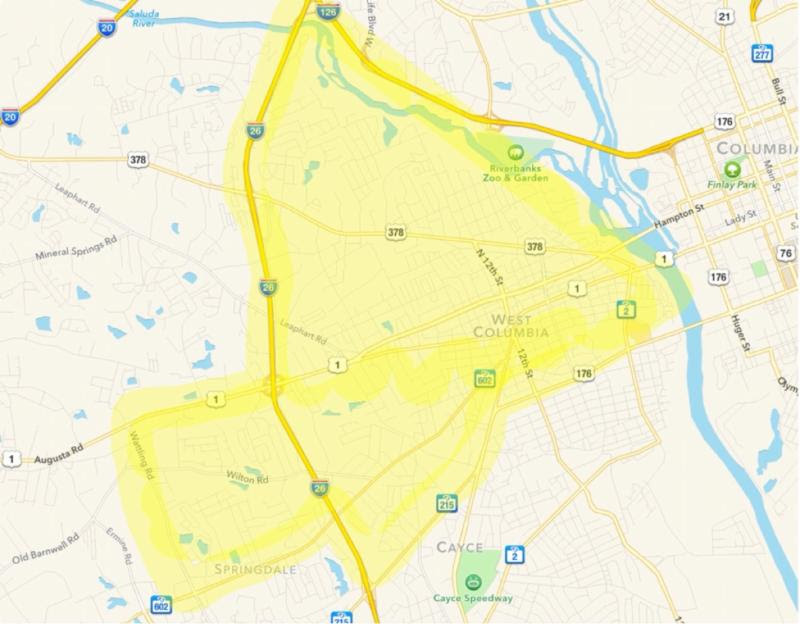 Out of a precaution to address possible sewer overflow issues due to flooding in areas along the Saluda and Congaree Rivers, the City of West Columbia is advising all water customers in the following areas to vigorously boil their water for at least one (1) full minute prior to drinking or cooking:

All West Columbia water customers in the area bordered by US HWY 1 to the north, Watling Road to the west, Airport Boulevard to the south, and I-26 to the east.

All West Columbia water customers in the area bordered by the Saluda River to the north; I-26 to the west; Airport Boulevard and Cayce city limits to the south; and Congaree River to the east.

The areas are also highlighted in yellow on the attached map.

Existing flood conditions could result in bacterial contamination of the water. Water customers in this area are advised to vigorously boil their water for at least one (1) full minute prior to drinking or cooking. Also, any ice made from water that has not been boiled should not be used for drinking purposes.

Water customers may check the city of West Columbia website at www.westcolumbiasc.gov for updates on the boil water advisory.

Water customers may also contact customer service at City Hall between 8:30 a.m. to 5:00 p.m., Monday through Friday at 803.791.1880. Emergencies occurring after hours and on weekends and holidays should be reported to the West Columbia Police Department at 803.794.0721.