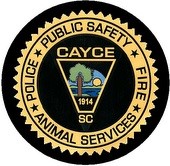 The crashed happened in the southbound lanes of 12th Street Extension between SCANA Parkway and Saxe Gotha Road. Officers responded to the incident 6:48 a.m. according to Antley.

No more information is available at this time.